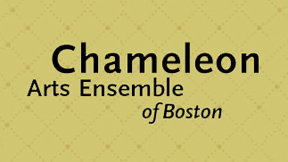 Founded in 1998, Chameleon has distinguished itself as one of the finest and most versatile chamber ensembles in Boston. Over the past 20 years, it has produced more than 200 concerts featuring a staggering array of 500 different works. It began with a modest five-concert series, and has more than tripled the number of annual performances, with 20 concerts planned for the 2018-2019 season.

Chameleon’s programs feature a mix of standard, neglected and contemporary chamber music, tied together by unique thematic concepts (highlighted by poetic concert titles) that provide framework to make all the music understandable and relatable. Chameleon aims to show connections rather than differences and create diverse and balanced programs of music that are satisfying and enriching on every level. It is this artistic philosophy that has earned Chameleon its excellent reputation, unqualified praise from critics, and a loyal, growing core of concertgoers and supporters. The Boston Musical Intelligencer praised it for “keeping the element of adventure alive…not just as a sophisticated craft, but as a labor of love.”

Richard Atkinson is a medical doctor and composer based in Boston.  His compositions vary in style, but are almost always inspired by the contrapuntal complexity of J. S. Bach’s music.  He also has a popular eponymous YouTube channel that features his colorful video analyses of various classical music masterpieces, with an emphasis on counterpoint and craftsmanship.  He recently spoke at the University of South Carolina’s “Public Music Discourse” conference about his role as a public music educator through the medium of YouTube videos. His most recent small composition was a three-voice modulating canon at the minor third based on the B-A-C-H motif, in celebration of Bach’s 333rd birthday this year.