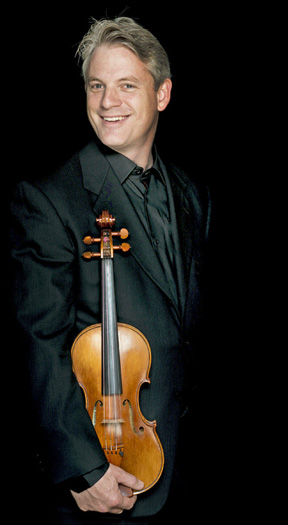 Jason Horowitz joined the Boston Symphony Orchestra at the start of the 2006 Pops season. As soloist, recitalist and chamber musician, he has performed across America, Europe, and Asia. A frequent guest soloist of the Boston Ballet, he performed the Stravinsky Violin Concerto with choreography by Balanchine eighteen times in the past two seasons.

Horowitz’s penetrating interpretations make him an “assured, eager advocate” (The Boston Globe) of composers of all eras. The Boston Herald has described his playing as “eloquent, persuasive, and, of course, wonderfully adept.” His many appearances in NEC’s renowned Jordan Hall include solo recitals, concertos ranging from Bach to Scelsi and Schnittke, chamber music, and several world premieres, including a “serene, limpid-toned performance” (The Boston Globe) of the violin concerto by Donald Sur.

At the age of sixteen he began working closely with the legendary Louis Krasner, beginning with the Berg Violin Concerto and later including the Schoenberg Concerto. His other main mentor was Philipp Naegele.

Having received both performance and academic honors upon graduation from New England Conservatory, where he studied with Masuko Ushioda, Horowitz returned to receive the school’s highest performance honor, the Artist Diploma, in 1996. He then continued his studies in Berlin with Christoph Poppen, joining the Munich Chamber Orchestra shortly thereafter. Horowitz participated in the Tanglewood, Norfolk, Banff and Pacific Music festivals, and was concertmaster of the Breckenridge Music Festival from 2001 to 2005. His yearly solo performances there included concertos by Tchaikovsky, Beethoven, and Mozart, as well as Berlioz’s Rêverie et Caprice. Formerly assistant concertmaster of the Colorado Symphony, he has also been guest concertmaster for such orchestras as the BBC Symphony, Baltimore Symphony, Hartford Symphony, and Rochester Symphony. His solo engagements have included the Mendelssohn Concerto in the Czech Republic; the Menotti concerto with the Charleston Symphony; the concerto Distant Light by Pēteris Vasks with Boston Ballet to choreography by Peter Martins; a series of performances of Corelli violin sonatas, also with Boston Ballet; and concertos of Beethoven, Brahms, Barber, Bach, Mendelssohn and Mozart with various orchestras in the Boston area.