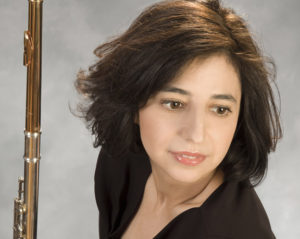 Praised by The Boston Globe for her “dynamic performances,” Deborah Boldin enjoys an active and diverse career as a recitalist, chamber musician and entrepreneur. Recent engagements include the Martha’s Vineyard and IBIS Chamber Music Societies, Pentangle Arts Annual Mozart Festival in Woodstock VT, Alea III, Boston GuitarFest, the Saco River Chamber Music Festival, First Monday at Jordan Hall Boston, Trinity College Chamber Music Series, and the Wellesley Composers Conference. She has collaborated with such noted artists as Robert Spano, Paula Robison, Kenneth Cooper, and the Borromeo String Quartet. Ms. Boldin has been a featured soloist on radio programs on WJHU, Baltimore, and WQXR, New York, and has made numerous appearances on WGBH, Boston’s Classical Performances Live. She has also appeared with the New World Symphony, Opera Boston, the Boston Philharmonic, the Rhode Island Philharmonic, and the Vermont and Portland Symphonies, among others.

As founder and Artistic Director of the celebrated Chameleon Arts Ensemble of Boston, Ms. Boldin’s innovative programming and sensibility have elicited unanimous acclaim from press and audiences alike. The Boston Globe praised her for “discerning ears and cosmopolitan tastes,” hailed “planning a good chamber music program is an art unto itself, and few in town have mastered it as persuasively,” and noted that “during intermission, concertgoers could be overheard marveling at the program’s breadth and wondering why other groups aren’t as adventurous. Chameleon makes daring seem easy.” Her programs received 2007 and 2009 Chamber Music America/ASCAP Awards for Adventurous Programming, as well as Koussevitsky Foundation Commission Awards in 2003 and 2015 for works by Barbara White and Laura Schwendinger. Chameleon was awarded one of only four 2015 National Endowment for the Arts music grants in Massachusetts for “Echoes of the Past,” a project she crafted to explore the influence of Bach on future generations, culminating in two performances of Bach’s complete Brandenburg Concertos.

Ms. Boldin designed and has overseen the growth of an innovative and highly successful music education outreach program for the Chameleon Arts Ensemble in partnership with Boston Public Schools, connecting children to the process of creating and enjoying music through direct interaction with the composer and performers. Under her leadership, Chameleon has held residencies at Salem (MA) State College and Lee University in Cleveland, TN, and was ensemble-in-residence for Northeastern University’s Fusion Arts Exchange, an international college student exchange program sponsored by the US State Department in the summers from 2007 to 2009. Ms. Boldin was for many years the flute instructor and chamber music coach at the Reveille! Music Festival for the Vermont Youth Orchestra.